The Large High Altitude Air Shower Observatory (LHAASO), a major scientific and technological infrastructure in China, is currently the most sensitive ultra-high energy gamma ray detector in the world. Although LHAASO is still under construction, its powerful performance has allowed the detection of more than 530 photons at energies above 100 TeV and up to 1.4 PeV from 12 ultrahigh-energy gamma-ray sources with a statistical significance greater than seven standard deviations, initiating the new era of gamma-ray astronomy. 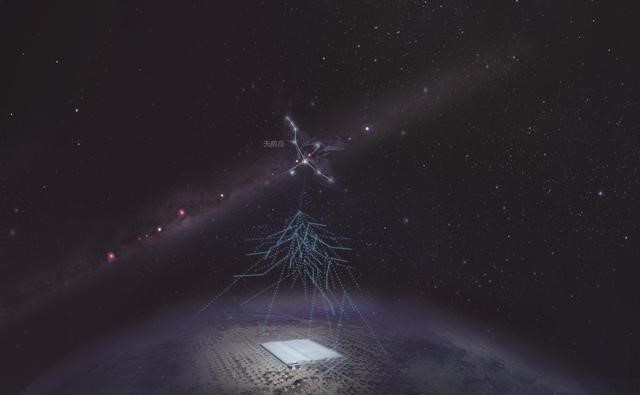 The composite image of 12 sources detected by LHAASO

Such milestone-like achievement has been published in the Journal of Nature on May 17, 2021. The research was carried out by the LHAASO International Collaboration Group, led by the Institute of High Energy Physics Chinese Academy of Sciences. Researchers from the School of Astronomy and Space Science at Nanjing University were deeply involved in, among whom Dr. Ruoyu Liu is one of the five co-corresponding authors.

While the universe is filled with cosmic rays, detecting the sources of them is far from easy. The main problem is that the cosmic rays' direction of motion is distorted by the ubiquitous magnetic fields in the universe. By the time such cosmic rays reach Earth, they are already deflected away from the direction of their sources, so the latter cannot be traced by looking back the arrival direction of cosmic rays. To overcome this problem, scientists came up with a way to locate the source of the acceleration by measuring the gamma photons emitted by cosmic rays inside or near their sources.

LHAASO consists of three interconnected detector arrays, KM2A, WCDA and WFCTA. The advantage of LHAASO over other gamma-ray detectors is its large detection area of more than a square kilometer, and the critical part of KM2A known as muon detector array which can reject cosmic-ray background by a factor of <10-4 above 100 TeV. This enables the detection of 12 ultrahigh-energy gamma-ray sources such as Crab Nebula, Cygnus region, and other new sources that have never been identified before. Despite having several potential counterparts in their proximity, including pulsar wind nebulae, young massive star cluster, supernova remnants and star-forming regions, the PeVatrons responsible for the ultrahigh-energy gamma-rays have not yet been firmly localized (except for the Crab Nebula), leaving open the origin of these extreme accelerators. On the other hand, the highest photon energies and energy spectrum detected by LHAASO exceed what scientists have previously expected for certain objects, representing a challenge to re-establish the understanding of these objects.

Phenomenological fits to the gamma−ray observations of LHAASO J1908+0621, and its morphology measured by LHAASO (the inset). LHAASO's measurement has extended the spectrum of the source to the ultrahigh-energy regime.

Scientists are fully confident that after a few years’ operation, it will be possible to conclude that the Milky Way is full of PeVatrons accelerators, which may change traditional understanding of the sources of high-energy particle acceleration in the Milky Way.