Supermassive black holes in the universe are swallowing gas around them. The infalling gas is called black hole accretion flow. Recently, a team led by Prof. Li Zhiyuan at Nanjing University (NJU) and Prof. Yuan Feng at Shanghai Astronomical Observatory (SHAO), found direct evidence for the existence of an energetic hot wind launched from the hot accretion flow onto a weakly accreting supermassive black hole. This result, published in the latest issue of Nature Astronomy, represents an important step toward understanding the accretion process around black holes and their feedback to the host galaxies.

There exists a supermassive black hole in almost every normal galaxy in the universe. The gas round the black hole will be accreted and form an accretion disk. Strong radiation is emitted from the accretion disk, which is the origin of the radiation in the first image of a black hole released in 2019.

Depending on the gas temperature, black hole accretion flows are divided into two types, namely cold and hot ones. Theoretical studies performed by the SHAO group over the past ten years predicted that strong wind must exist in hot accretion flows that typically feed low-luminosity active galactic nuclei (LLAGN). These winds are also found to play a crucial role in galaxy evolution, according to the state-of-the-art cosmological simulation Illustris-TNG. However, direct observational evidence for such a wind proved difficult to obtain.

The NJU and SHAO team found strong observational evidence for an energetic outflow from M81*, a prototype LLAGN residing in the nearby massive spiral galaxy Messier 81, by carefully analyzing a high-quality X-ray spectrum. The spectrum, which has unparalleled resolution and sensitivity, was taken by the Chandra X-ray Observatory in the years of 2005-2006, but remained unexplored for the wind aspect until now.

The outflow from M81* is evidenced by a pair of Fe XXVI Lyα emission lines that quasi-symmetrically redshifted and blueshifted at a bulk line-of-sight velocity of 2800 kilometer per second, and a high Fe XXVI Lyα-to-Fe XXV Kα line ratio that implies a temperature of 140 million degree of Kelvin of the line-emitting plasma.

To interpret the high-velocity and high-temperature plasma, the team carried out magnetohydrodynamic simulations of the hot accretion flow onto M81* and produced synthetic X-ray spectrum of the wind launched from the hot accretion flow as predicted by the numerical simulations. The predicted emission lines were in excellent agreement with the Chandra spectrum, thus providing compelling evidence for the existence of a hot wind. Moreover, it was found that energetics of this wind is sufficiently strong to affect the close environment of M81*. This finding provides the missing link between observations and the theory of hot accretion flows, as well as the latest cosmological simulations with AGN feedback. 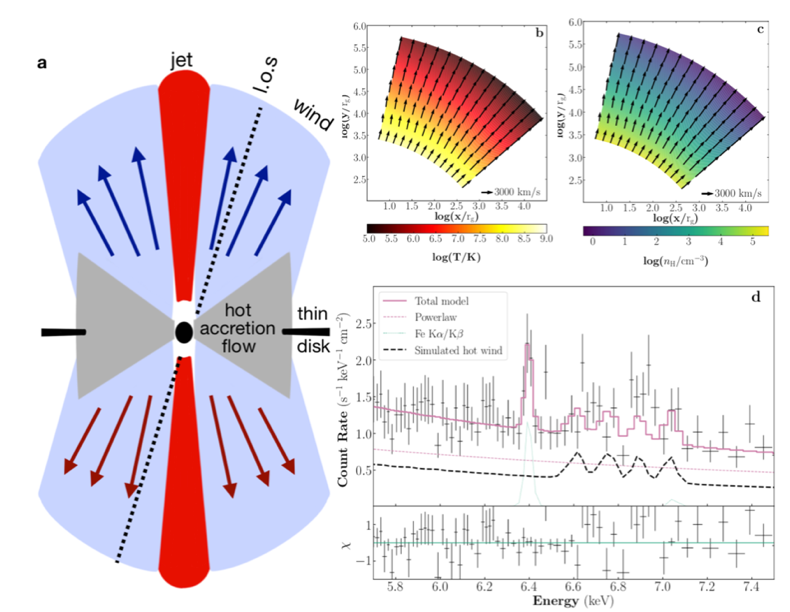 The observed blueshifted and redshifted iron emission lines and their comparison with the theoretical predictions based on numerical simulations.