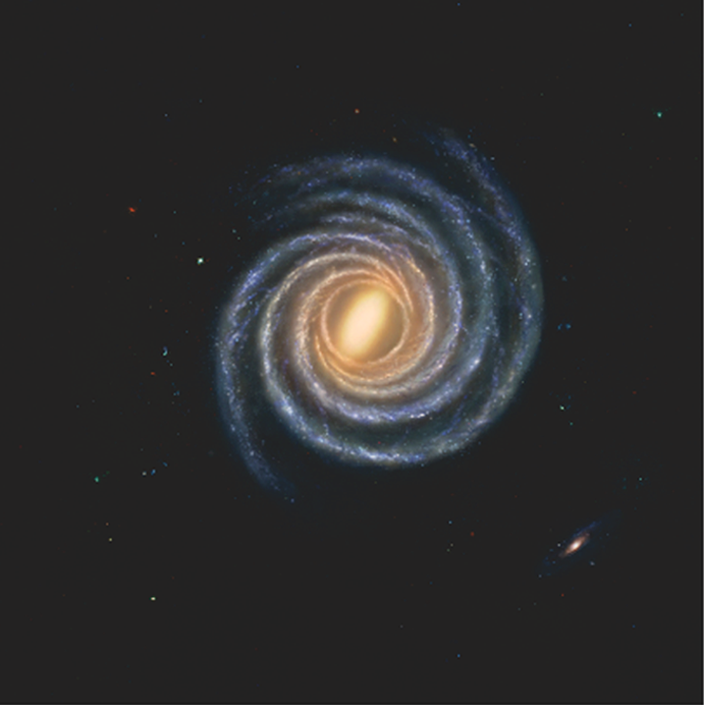 With coordinate frame in kpc

With the names of spiral arms

With from an oblique angle

This image of the Milky Way is based on 200 trigonometric parallaxes for masers in massive star forming regions from two large radio astronomy projects, the Bar and Spiral Structure Legacy (BeSSeL) Survey and the Japanese VLBI Exploration of Radio Astrometry (VERA) to survey the Milky Way from the inside out. These parallaxes allow us to directly measure the forms of spiral arms across roughly one-third of the Milky Way, and we have extended the spiral arm traces into the portion of the Milky Way seen from the Southern Hemisphere using tangencies along some arms based on carbon monoxide emission (Reid et al. 2019). The locations of a large numbers of star forming regions found in various catalogs were obtained by using our Bayesian distance estimator (Reid et al. 2016) in order to fill out the spiral arm model.  According to these new results, the image above has been created by a combination of computer and handwork. In order to paint a realistic image, we have considered the likely appearance of the component elements of the spiral arms, such as young OB stars, giant HII regions, young star clusters, nebulas and filaments based on the images of a variety of spiral galaxies. The image clearly presents the Milky Way as a barred spiral galaxy with four major arms and some extra arm segments and spurs. It is currently the most scientifically accurate visualization of what the Milky Way looks like.

Images on this website can be freely downloaded and used for educational and scientific purposes, and for posters designed to increase public understanding of the Milky Way. Please use the following credit: “Xing-Wu Zheng & Mark Reid  BeSSeL/NJU/CFA”.

BeSSeL is the Bar and Spiral Structure Large Survey,
a VLBA Key Science Project.
NJU is the Nanjing University in China.
CFA is the Harvard-Smithonian Center for Astrophysics in USA.